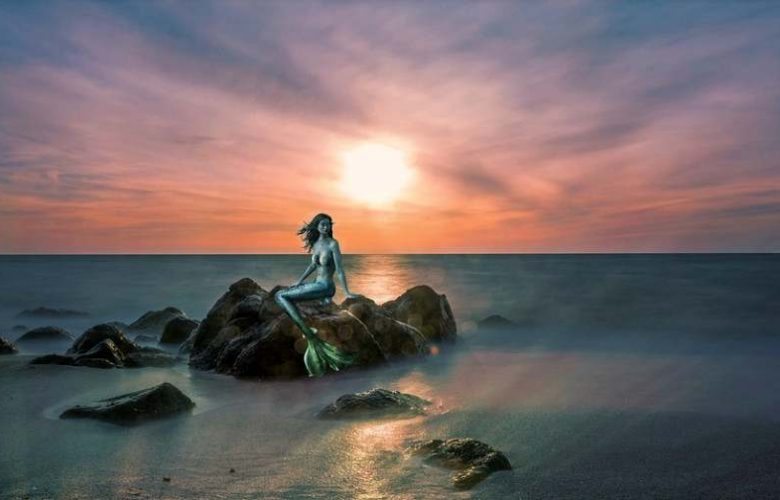 It would not be wrong to say that most of us were introduced to the world of mermaids by Disney’s Ariel. The extremely beautiful redhead is the innocent heroine of the story, who overcomes every obstacle to finally meet the love of her life.

Mermaids are mythical creatures with a human upper body and lower half of a fish, with fins. They are often portrayed as innocent and beautiful beings. However, according to myths, they are the vixens of the sea and symbolize the danger of destruction. In the legends, mermaids are painted as monsters under the shroud of innocence, luring the sailors to their death.

Painters and artists have always been fascinated by such mythical creatures. Throughout decades, artists from around the globe have played with their colours and brushes to craft amazing mermaid paintings. Let’s look into five mind-blowingly beautiful mermaid paintings that will take your breath away.

Howard Pyle was one of America’s most famous illustrators and storytellers. Painted with the style of romanticism, “The Mermaid” is not only Howard Pyle’s most famous artwork, but it is also equally mysterious. Pyle left the U.S. without completing the painting to travel to Europe. Unfortunately, Howard Pyle never returned and passed away in Florence, Italy. The painting was later finished by Pyle’s student, who added Fish and crab to the scene.

Talking about the painting, it looks like a scene from a fantasy tale – the mermaid emerges from the depths of the sea to save the shipwrecked man. The American illustrator completely justified the moment between the two subjects of the painting, as their pale bodies locked in an embrace under the moonlit sky.

The real mystery of the painting lies in the relationship between the mermaid and the sailor. Is it an affectionate goodbye as the mermaid saved the sailor from the wreck? Or is the sailor unconscious, and the mermaid is trying to place him on the rock? With all the mysteries involved, the painting is surely one of the famous mermaid paintings of all time.

A setting of fantastic eroticism and striking beauty, “A Mermaid” by John William Waterhouse had to be on the list. The painting takes inspiration from Alfred Lord Tennyson’s poem, “The Mermaid.” Especially the lines: “Who would be a mermaid fair, singing alone, combing her hair. Under the sea, in a golden curl With a comb of pearl on a throne?”

The mermaid figure on the other hand looks as if the inspiration has been taken from Disney’s iconic redhead mermaid, Ariel. On the contrary to the legends and myths, the painting depicts the feminine and classic beauty of the mermaid, instead of the danger. The redhead mermaid sits calmly on the shore as the waves draw in around her.

While the icing on the picture is the rock scene in the background, the large shells containing pearls add to the beauty of this masterpiece. The painting is currently a part of the Royal Academy Collection in London.

‘The Sea Maiden’ is largely linked to the mermaid story by Hans Christian Anderson. Painted by Evelyn Pickering De Morgan, The Sea Maidens features five blonde beauties holding hands on the shore; their tails are inside the water while their upper bodies remain above the water surface.

The best part about the painting is Evelyn’s mastery of the brush and colour palettes. The artist has tried to give the mermaid a beautiful and innocent look. However, their cold eyes and expressionless faces are the sign of their lack of immortal soul and danger.

It is also worth noting that all five mermaid sisters in the painting are based on one particular woman, Evelyn’s maid Jane Hales. It is said that the artist had a very passionate relationship with her – so close that Morgan was buried next to her.

“Ulysses and the Sirens” by Herbert James Draper depicts an episode from Homer’s epic poem Odyssey. In the poem, the sirens entice the sailors to their destruction, with their temptingly beautiful singing. As a modern artist, Draper successfully transferred the Sirens’ seductiveness from their song to a greatly painted visual form.

As for the painting, viewers can see a boat full of well-built sailors, terrified by the sirens as they approach the boat. Draper, in the paintings, has depicted the sirens as beautiful mermaids who invade Ulysses’ ship.

One thing to bear in mind is that Draper’s Ulysses and the Sirens contain many contrasts, including the sea and the sky, the masculine, and the feminine, and dark and the light. These contrasts are greatly enhanced by the artist using his colour and brush strokes understanding.

The Fisherman and the Siren – Lord Frederic Leighton

“The Fisherman and the Siren” is one of Lord Frederic Leighton’s most remarkable works. The painting depicts a handsome young man who probably is a fisherman, in a deep embrace with the beautiful mermaid.

The mermaid’s body aka the siren in the painting slowly emerges out of the water and then twists around the feet of the fisherman. With the looks of the man, it looks like he already is spellbound by the mermaid’s beauty, and has lost the ability to resist.

Rich in its imagery and allegory, the artist has portrayed the traditional story of the mermaid, who lures fishermen and sailors to their death. The story is so well painted down that even a casual observer can understand the painting pretty easily.

To sum up, these are some of the most beautiful mermaid paintings that can take your breath away. They are amazingly good-looking and can enhance the beauty of your house or your office.